This work is now superseded by the methods more recently implemented in my PhD.

A computational implementation of Jane Jacobs generators of diversity

Part of the reason for the frequent recent mentions of Jane Jacobs on this blog is that I’ve been working on developing a ‘Computational Implementation of Jane Jacobs’ Generators of Diversity’ as part of my recently completed dissertation at CASA UCL.

Jacobs argues that diversity fuels autocatalytic webs of social and economic activity. These complex webs of interaction are both a cause and consequence of the agglomeration of people in cities, leading towards a co-evolutionary emergence of increasingly varied and complicated inter-relationships. She argues that cities must be sufficiently heterogeneous and granular for these processes to unfold without hindrance. For this purpose, she proposes four “generators of diversity”, briefly consisting of mixed-uses, short-blocks, buildings of varied age and condition, and a dense concentration of people. At first glance, these may appear simplistic, but they actually rest on a profoundly reasoned conception of urban economic processes and the nature of how complex systems work.

Some of the logic underlying the theoretical approach can be gleaned from my previous posts (particularly this one and this one). At the end of the day, it boils down to maximising the combinatorial possibilities for varied economic relationships to form and co-evolve and providing the necessary flexibility for these relationships to vary and adapt across the space-time fabric of cities. In other words, the greater the diversity of land-uses, the greater the number of route choices, the greater the economic opportunities for fledgling businesses (affordable buildings/rents), and the greater the number and diversity of people, the more ways neighbourhoods can adapt and co-evolve. Crudely, the more potential and flexibility to connect more things in more ways at varied places and times throughout the day, the better.

The (wicked) problem with applying performative and parametric design at the urban scale is that complex systems don’t exactly yield themselves to prediction or control. In the parlance of complexity science, this means sensitivity to initial conditions, path dependence, phase transitions, multiple equilibria, and all the novel ways for positive and negative emergent feedback processes to occur. (Don’t get me wrong, modelling complex systems can still be hugely important for understanding them.) However, a large part of the issue is that the physical structure of cities is just the tip of the iceberg; more critical is the unfolding of relationships between places and spaces rather than the manifestation of places and spaces in a static sense. This point is nicely underscored by Mike Batty: “…cities must now be looked at as constellations of interactions, communications, relations, flows, and networks, rather than locations … location is, in effect, a synthesis of interactions…” (Batty 2013, p.13) The bottom-line is that spatial structures and the enfolded flows of people, information, and resources co-evolve in very complicated ways.

While this complexity leaves us somewhat flustered when planning cities, Jacobs’ approach is, in fact, straightforward and effective. By arguing for an urban substrate that is sufficiently granular, heterogenous, and porous, Jacobs conveys the need to provide a requisite level of combinatorial flexibility for these webs of co-evolutionary development to unfold. This entails unpredictability and is necessarily a bottom-up and ‘epigenetic’ process. It is premised on self-organisation and — this can hardly be stressed enough — the capacity for constant change. A significant aspect of her argument is that we shouldn’t get in the way by imposing overly abstract and rigid urban structures that severely hamper these processes from unfolding over time and through space. (An excellent overview of these themes can be found in Stephen Marshall’s Cities, Design, and Evolution (Marshall 2009)).

The computational implementation uses Jacobs’ qualitative discussion of the “generators” as a departure point. Due to Jacobs’ inductive approach, there is no single interpretation for their implementation as computational tools. Therefore, a degree of subjectivity and interpretation remains, and there is a recognition that the computational expression of the measures will be affected to some extent by the available computational techniques and the nature of the data to which they are applied. However, this said, the implementation does stay focused on the core mechanisms at the heart of Jacobs’ arguments. Chiefly, diversity and working from the ‘particular’ to the ‘general’ (from the small to the large / from the bottom-up). The measures are implemented using a weighted diversity index, a graph centrality measure based on route complexity, the coefficient of variation of non-domestic property valuations, and a density measure based on the number of addressable locations. 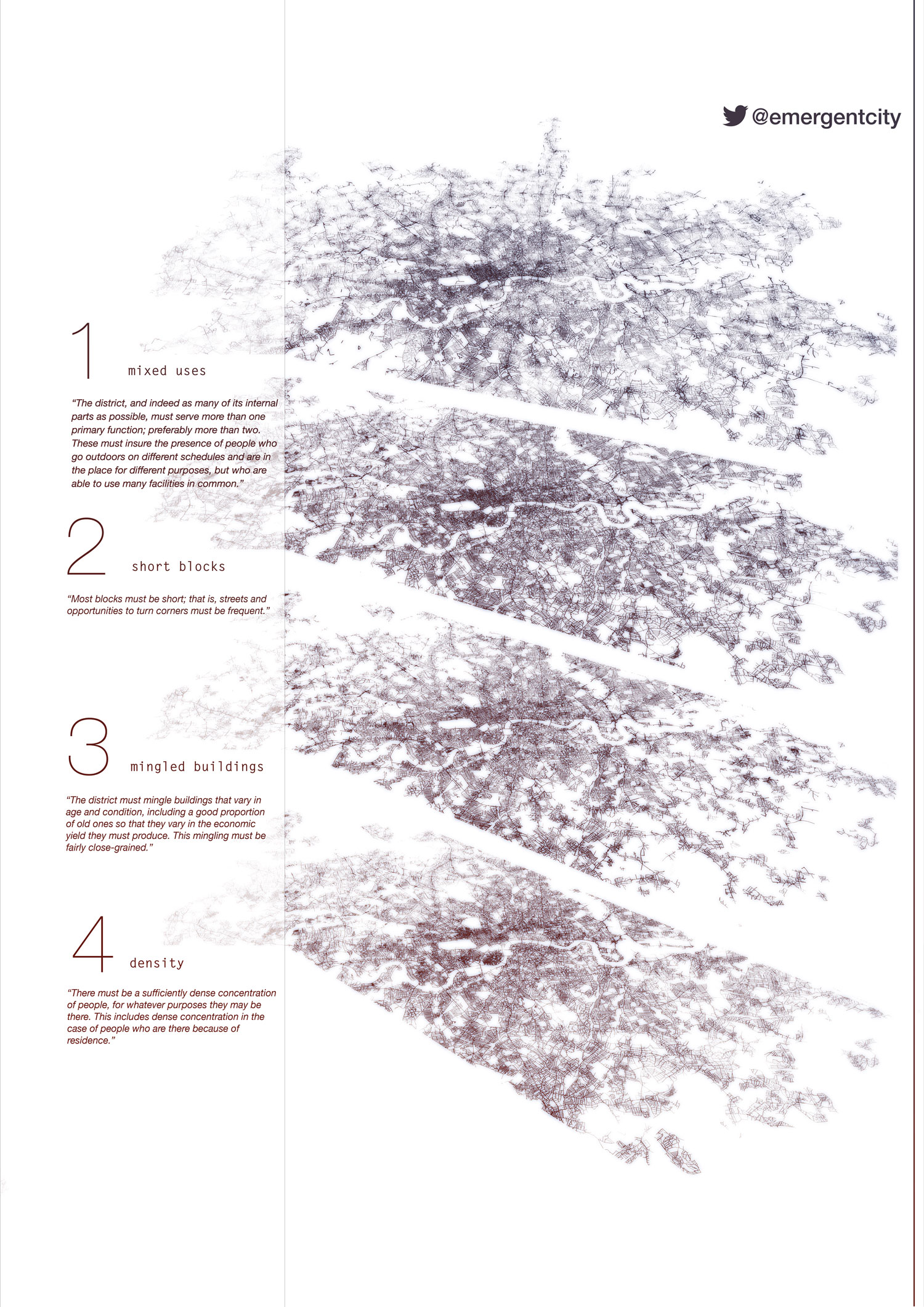 The data consists of several data sources combined into a Neo4j graph database, including the Ordnance Survey’s ITN street network dataset, Ordnance Survey AddressBase land-use classifications data, and the Valuation Office Agency’s non-domestic property valuations. A large part of the implementation was developing a localised computational methodology that iterates the measures for each street segment based on local attributes within a range of network path threshold distances (150m - 1200m). The computational analysis is done with Python using various packages and modules such as Pandas, Scipy, Graph-Tool, and Shapely).

The methods are applied to a comprehensive list of 535 town and city boundaries for England and Wales (Arcaute et al. 2016). There is notable variability in the results between cities and a generally insignificant correlation to population size, thus indicating differences within and between the cities based on their local properties. On average, British “New Towns” tend to rate lower across all measures and correlations. The New Towns also tend to have fewer local retail and office establishments, lower local non-domestic valuations, larger non-domestic occupant areas (less granularity), and fewer overall distinct land-use classifications.

Furthermore, the data was utilised to explore Jacobs’ assertion that diversity and the subsequent complexity of inter-relationships increases for larger cities. By comparing the number of distinct land-use types across towns and cities in England and Wales, it was confirmed that the number of land-use types increases in relation to the size of the city and that this relationship can be modelled with the species-area-laws that are observed in ecology.

I feel it necessary to note that the above is only a tentative and explorative step in the overall scheme of things. There is tremendous complexity and work to be done in teasing apart the relationships between these measures, let alone consolidating them into a combined measure. However, I think that it is safe to say that Jacobs’ emphasis on autocatalytic webs of relationships generated by diversity and the need to work from the small to the large offers a potent foundation for further exploration. This approach is in some ways diametrically opposed to the current trend towards formulating universal mathematical laws that apply to the large-scale statistical averages of cities, a practice that Jacobs argued forcefully against.